An Adventure with Margot (or, Visit the RheinSteig)

Heiko and I were borrowing a camper van from a friend, and looking forward to a few days of adventure. We planned to leave in the evening, head toward Sankt Goarshausen, and find a Raststätte in which to park overnight. In the morning we would get an early start on a 20k trek on the RheinSteig. As I pulled together clothes and supplies for the three-nighter (way too many snacks for a two hour drive, way too many layers of clothing for two and a half days of hiking), Heiko picked up the van. “Das Auto ist verruckt!” Heiko laughed when he came back to get me and load up our things. The “camper”, it turns out, was a converted utility van, now complete with a built-in CD player with not-so-built-in speakers, bed above the cab, tiny toilet and shower stall, 2-burner gas stove, sink and table and benches. Thanks to a second battery that recharges as she drives, Margot even has a heater for chilly nights. Margot, as the van is christened, is bright orange.

We already figured that the trip with Margot would take about twice as long as Google maps had estimated. She wasn’t exactly a speed demon. We also knew that the amount of exhaust that Margot expels makes her verboten in Frankfurt. We tried to leave the city as quickly as possible, but as we puttered along in the far right lane, full semi-trucks zoomed past us. We popped in a Tracy Chapman CD and sang loudly over the rumble of the engine.

The most direct route from Frankfurt took us winding through the Taunus mountain range. About halfway into the Fahrt, Margot’s stereo went dark. After five minutes of bickering about how to turn the stereo back on, we figured we should refuel (as you might imagine, Margot is a heavy drinker. 50 kilometers and she’d already guzzled half of her 20L tank) and check-in with Margot’s dad about the stereo.

50€ and a pit stop later, Margot wouldn’t start. Luckily, Heiko had brought along a little motorcycle battery that was sitting around in our Keller. The fact that he’d even thought to bring an extra battery suggests he’d anticipated some issues… With just one jump-start, we were back on our way. As we got further into the mountains and started our descent, the roads became narrower and less populated. Heiko asked, do the headlights seem dimmer to you? Uh oh.   In fact, every time Heiko braked around a curve, the headlights dimmed. The battery was dying. After stretches of windy road and no towns, we rolled into Sankt Goarshausen, turned into the first parking lot that we saw, and let poor Margot rest. It was late Saturday night. There wasn’t much to but wait until morning, when there still wouldn’t be much to be done about our situation, because it was Sunday. Debate ensued about what to do. Drive back at first light? Were we even sure Margot would start again, let alone make it back to Frankfurt? Well, we figured, at least we have somewhere warm to sleep for the… Oh, hmm. If Margot wasn’t recharging her own battery as we drove, she certainly wasn’t putting any juice in reserve for the rest of the system. Indeed, the heater would not start. Under piles of clothing, sleeping bags and blankets, we curled up and tried to fall asleep.

We woke up to find ourselves parked in the middle of the Kundeparkplatz for Rewe GetrankeMarkt.

Businesses in Germany are closed on Sunday, so we didn’t need to worry about customers or management being put off by our presence. That also meant that we had little chance of finding a mechanic, so we decided to proceed with our Rheinsteig hike to Kaub. The scenery was beautiful in its winter glory. Though not yet snow-bedecked, the frosted landscape was magical; the lichen-draped trees were like magnified snowflakes with such delicate patterns crystallized on their frozen limbs. 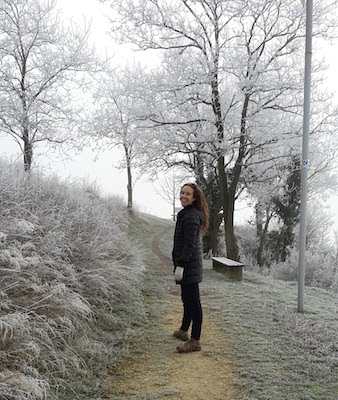 Several lookout points didn’t deliver the promised sights (Dreiburgenblick = Keineburgenblick) because of a heavy morning fog, but the nature surrounding us was plenty to look at. In spite of the weather we weren’t the only ones on the trail, though it was far from crowded. Regular trail markers appear often enough to assure the paranoid hiker (me) that you’re still on the right path. The markers also point out diversions from the route, and give the distance to the next town on intersecting trails. We decided to take a turn from the mountains down to the Rhine banks to visit the Loreley statue. The trail winds quickly downhill, and enters town literally between the back doors and balconies of the village homes.

A short distance along the Ufer brings you to a beautiful statue of a young maiden with unbelievably round perky breasts, perched at the end of a long causeway. The statue commemorates a fabled siren that, from the cliffs above the river, seduced sailors to their doom. Many credit the poem by Heinrich Heine for making the fable famous (find the poem and an unbearable rendition by an unidentified singer on the LoreleyInfo website). We failed to notice the trailhead leading back up to the Rheinsteig and on to Loreley Rock, and instead continued for a long way along the Rheinbergenweg, a seemingly endless path right next to Rheinstrasse. Though that roadway is not very wide, the cars flying past detracted from the pleasure of the scenery after a while.

Eventually we crossed away from the river, under the train tracks and started up what looked like a service road for the power lines and maybe the Forstner. We figured we would re-cross the Rheinsteig eventually, or at least have a quieter walk than the Rheinbergenweg provided. Boy, was I delighted when we came across that lovely little Rheinsteig marker! 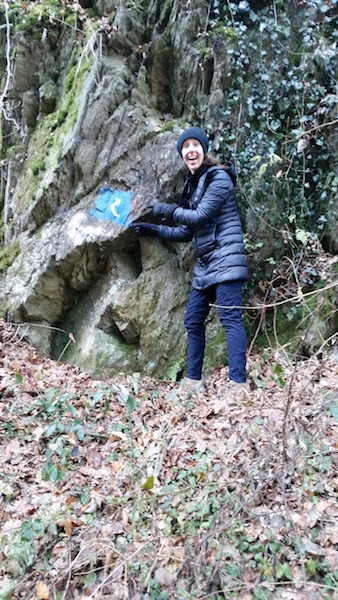 Back on track, we walked through forest, gently sloped fields, rocky clifftops and at least one quaint little mountain town. Though this is described as the most challenging leg of the Rheinsteig, there wasn’t any part that was treacherous, even with the ground damp from the overnight freeze. Only one section has some rock hopping required, and there’s an extremely sturdy handrail to help you along. The last section before Kaub even offers a longer but easier bypass of what the sign described as “Alpine Conditions”.

We descended on sleepy little Kaub around 4PM, easily checked the train schedule (departing every half-hour or so) and settled in for a drink and a bite at the only open restaurant in town. The tables were laid with Christmas-y decorations and complementary gingerbread cookies. We shared the small dining room with a motorcyclist (the Rheinstrasse is a common tour route for motorcycle enthusiasts), and a couple from a nearby town with their massive dog and his slobbery jowls (many restaurants in Germany seem to allow well-behaved dogs to join their people at the table). They confirmed that the lull in activity was actually season-long, so the town can take a break from the hoards that flock there in the summer.

The train was an easy 10-minute hop back to Sankt Goarshausen (3,70€, paid directly to the conductor on the train.).

That evening we chatted with some neighbors, who said their grandpa could give us a jump-start that night, but wouldn’t be there in the morning. We figured we would try again to let Margot charge up her battery. Herr Opa showed up with a gravely voice that sounded like it had years of abuse from cigarettes and whiskey, and even he let out a roar of coughing when Margot chugged to a start and spewed exhaust in his face. We spent the next hours checking if the battery was charging (it wasn’t), playing guitar, backgammon, and trying to devise a system to trap the heat generated from the gas Herd into our little bed vestibule. By the time we climbed in bed we had seat cushions, walking poles, towels, clothespins and a windshield reflector strategically draped around the van interior.

At 8AM the next morning, Heiko greeted the friendly Rewe employees and then every customer that entered the parking lot until someone helped us jump-start. We hoped that, without the headlights running, Margot would still be able to get us back to Frankfurt. To avoid the elevation changes and windy roads of the mountains we would drive along the Rhine down 42 to Rudesheim, where we could then cut east toward Frankfurt. Less than 20 minutes on, Baustelle work blocked our planned route and redirected to the only other way out. Through the mountains. Was ist das fur ein Autobahn?? Heiko asked, as we turned onto the next skinny little route. It seemed hardly wide enough to pass cars going the other director, so the poor suckers in Margot’s stinky trail had to wait until we had a chance to pull over and let them pass. Afraid that the van would poop out if we stopped completely, Heiko just slowed and put on his blinker as we pulled into the shoulder. Several painstaking crawls later (why aren’t they passing? Go! Go! I can’t slow down any more!), we realized that the blinker might not even be working.

As we rumbled down into Rudesheim a stream of white smoked swept from the front grill past my window, and Heiko noticed in his rearview a new color in the exhaust. Heiko also then conveniently remembered that we hadn’t checked the oil before starting out, which Margot’s dad had recommended. We decided that the new developments merited the risk of turning off the engine. We pulled into a gas station and locked eyes as Heiko tentatively turned the key. Smoke suddenly billowed from the front grill and through the vents into the cab, filling the van and the air with steam and smoke. We scrambled out of the cab. Heiko scratched his head. I went inside for coffee. Once Margot had cooled off a bit we opened the front grill to inspect the severely overheated engine. A friendly trucker pointed out that getting another jump-start was the least of our worries: Margot actually had a broken belt drive. We finally accepted that we would not be driving Margot home. 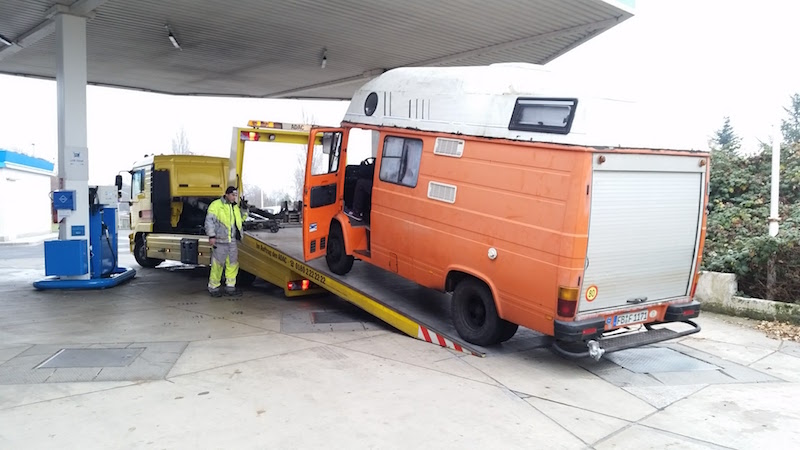 A tow truck came, loaded Margot onto its bed and us into the cab. It was a quiet, warm and comfy ride the rest of the way home.

Accommodations: every town seemed to have Ferienwohnungen on offer. Kaub’s youth hostel was centrally located, and presumably others are available along the way. Loreley Rock, among other places, allows camping. There’s no reason, though, that you have to overnight to enjoy it (see transportation!)

Transportation: The R-Bahn 10 train departs directly from Frankfurt Hauptbahnhof and stops in many towns all along the Rhine up to and beyond Koblenz, where the Rheinsteig starts/ends (1:30 mins to Kaub, for example). Several sites help with transportation planning: I like RMV the best, and they have most of their pages available in English. VRM operates the specific stretch of train, and is the only site to give you fare information. Their English pages are limited.

To Do: Several websites provide information to help plan a trip.  RheinSteig, LoreleyInfo, and UNESCO, to name a few.  Limited parking is available near the Loreley Statue. See here for instructions to find the pathway leading up to the lookout from Loreley Rock and the Visitors Center